Mark Twain, like modern celebrities, endorsed many products over the years but the one that he genuinely endorsed because of his passion – was watches. He loved watches, but hated having to get it serviced because of the cost and ineptitude of watchmakers or “watch experts”. He wanted affordable watches for everyone, himself included, that didn’t cost hundreds of dollars, and even more in repairs.

Mark Twain was approached by his nephew-in-law to invest in a watch company, the Independent Watch Company in Fredonia, Ny founded by the Howard Brothers; they wanted to make a signature “Mark Twain” movement. The Mark Twain watch debuted in 1882 which was “an 18-size, key-wound movement with a subsidiary seconds function.” This partnership didn’t last long and eventually Mark Twain parted ways with his nephew-in-law over issues with the Howard Brothers and their business practices. His search for affordable watches continued. 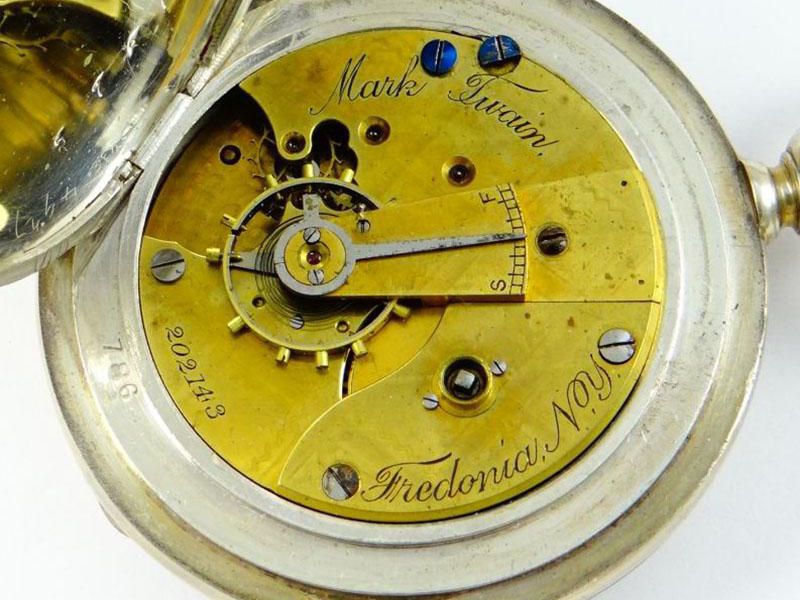 In 1889, Robert H. Ingersoll thought that he could sell watches for only $1 after seeing the Waterbury Clock Company’s “Jumbo” watch that featured a clock movement with minimal parts and was very cheap. Eventually Ingersoll partnered with Waterbury and in 1892 sold the first version of the “Yankee” watch, also known as the dollar watch, because it cost only $1.50. Mark Twain bought this watch, and soon after another one; making his wish of an affordable watch come true. He later wrote of the watch “when a watch starts losing time, ‘you have choice of two things to do: throw it in the fire or take it to the watch-tinker. The former is the quickest.’” This watch was as American as can be because of its simplicity, availability, and that it worked as well as the next watch. “Some rare men are wonderful watches, with gold case, compensation balance, and all those things,” he mused late in life. And “some men are only simple and sweet and humble Waterburys. I am a Waterbury. A Waterbury of that kind, some say.”