The typical watch cell or watch battery you find in a quartz watch seems innocuous when you first encounter one, and for the most part they remain a relatively simple matter to handle, but there are several potential issues that should be kept in mind along with a few guidelines for proper handling. Let’s put the primary concerns simply, and then expand on them a bit. Along with some basics, we’ll go over a little extra background information where relevant with each of these points. 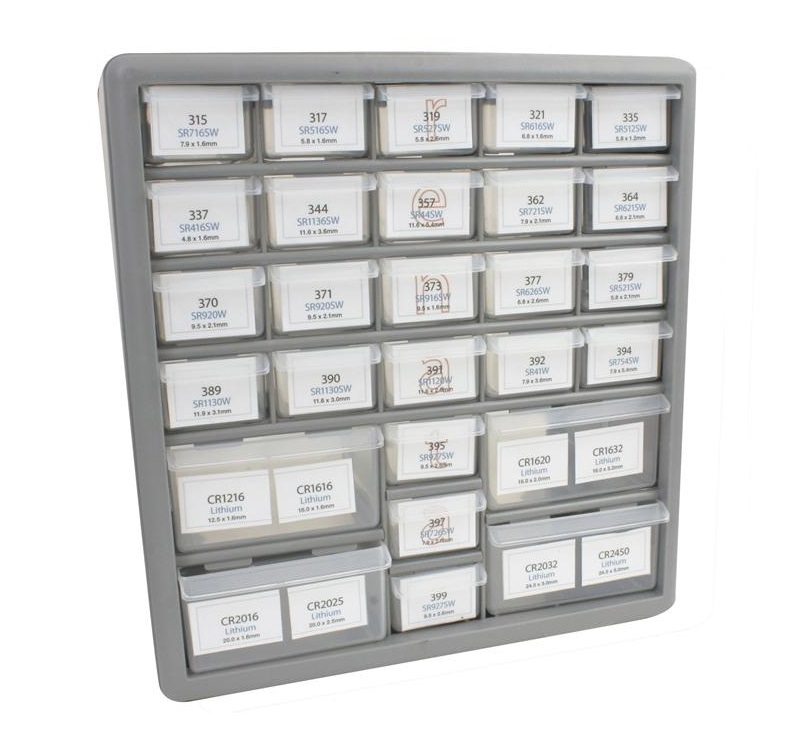 As with many things in life, new cells are best stored in a cool and dry environment. Leaving the cells in their original packaging until it comes time to install them is probably the best idea, as this will prevent any accidental metal contact to the cell. Exposure to too much heat will cause the cells to lose energy more quickly before use, so avoid storing them anywhere that gets warmer than room temperature- for instance be mindful of storing them on top of or next to electronics as they can generate enough heat to become an issue. Generally speaking most cells have a shelf life of about 5 years before the energy left inside drops to a level where you will start to notice issues when you install them, so while buying in bulk saves money, you should only buy as many cells as you’ll be able to use before they start to degrade. A small cabinet with lots of drawers makes a good organization system, as cells can be clearly labeled and easily found when needed.

One of the primary things to keep in mind is that directly handling the watch cells with metal tools or storing them directly in metal containers is to be avoided. Doing so presents the risk of the metal bridging the two terminals of the cell and causing a short, which will serve to rapidly draw energy from the cell both decreasing its lifespan and generate extra heat which can potentially cause the cell to fail.

When it comes time to install a cell, you should be in the mindset that you never want to touch the cell with your bare hands or fingers. The oils on your skin and those in your fingerprints can be electrically conductive and act to slowly short the cell out if they bridge the insulation between the terminals of the cell, and some people who have more acidic skin oils can even cause corrosion directly on the cell itself (or even the movement if you touch it) as it sits inside the watch. Always use non-conductive tweezers, like those made from plastic or with wooden tips, to handle and move the cell around and if need be you can use the back end of the tweezers to help press the cell into place in a movement. If you find working with tweezers to be too cumbersome for changing cells and want to use your fingers, you can wear latex gloves or finger cots to keep from touching things directly. 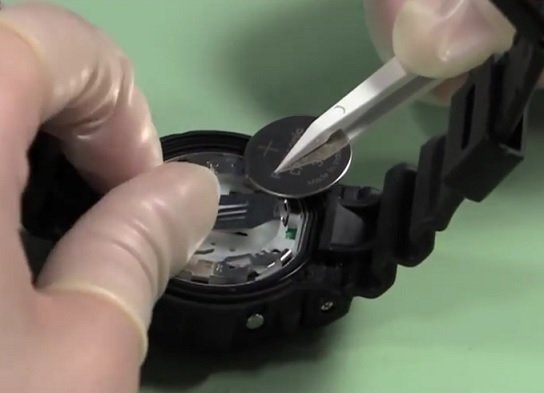 It’s usually a good idea to mark the cell you’ve installed in a way that you can recognize it the next time it comes back and know when you installed it. This helps to make sure someone else hasn’t been inside the watch potentially causing problems by clumsily changing a cell, as well as helping to identify if a movement may need service or exchange if the cell’s service life is much shorter than it should be. Some people like to scribe their initials or another identifying mark and the date onto the cell, but this poses the risk of causing damage to the cell if the scribe marks are made too hard or too deep. A very fine pointed permanent marker serves the same purpose and does not damage the cell. 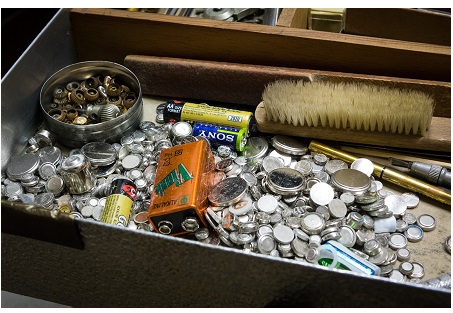 You may encounter a cell in a watch which has leaked. This is typically seen in one of two forms; either a clear and slightly oily looking fluid under or on the cell or a white powdery deposit . The oily liquid form has the potential to wick itself into and throughout the movement (and potentially out and onto the hands and dial on the front of the watch) via capillary action. The white powder is simply the dry crystallized form of the liquid, which is usually only seen on older leaks or ones which have been very slow. It should be noted that in either case, the material which has leaked is a highly alkaline electrolyte solution from inside the cell, and you should avoid contact with the residue with your skin regardless of whether it is wet or dry. If you do get any on your skin it is best practice to brush off the dry powdery type as best as possible before washing thoroughly with soap and water. Contact with the wet type can be dabbed off with a disposable cloth before washing thoroughly. If only light leakage has occurred, it may be possible to clean it from the movement by dabbing with a product like Rodico or Rub Off, but if the leakage has spread it’s often necessary to fully clean and service or just exchange the movement as any remaining residue will continue to cause corrosion on the movement. 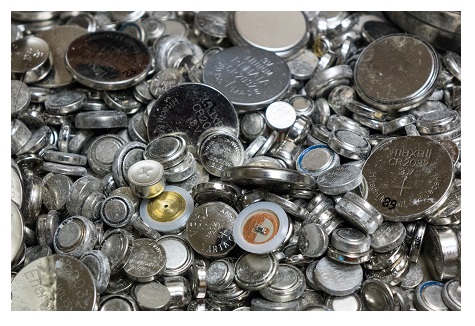 The old cells themselves can also be dangerous in several ways, so storage and disposal should taken into account. Many of the older cells contain small amounts of mercury, which means they can’t be simply thrown away. The first mercury-free cells debuted in 2004, and wide adoption and production of them only occurred several years afterward. All cells without mercury should be marked as such or simply as “0% Hg.”

When large numbers of old cells are kept in the same container, the very small amounts of energy left in them can flow together if the cells are in contact with each other, causing enough heat buildup to make a cell explode. The explosion itself isn’t particularly dangerous, but it can send the halves of the cell flying several feet through the air with a loud pop and splatter small amounts of the corrosive electrolyte around. It’s best to store them in a non-flammable, non-conductive, and non-airtight container for this reason.

The good news is because the cells are a silver oxide base, they do contain a small amount of silver which does have scrap value, and there are several scrap and refining companies which will buy old used cells by the pound, so saving your old cells up serves to help keep the environment clean and generate a little extra money when you sell them off.