How to Change a Metal Watch Band – Gucci Style Screws

How to Change a Metal Watch Band – Gucci Style Screws

Whether your current watch band is worn out, or you would just like to give your watch a new look, you can easily replace your metal watch band. This guide will help you change watch bands in cases with holes in the lugs. How do you know if your watch case is held in place with Gucci screws? Check the watch lugs, the metal part that sticks out to hold the watch band. If the lugs look like they each have one small round hole, the band might be held in place with screws, check the holes closer and if the tips of the pin holding the band in place have screw heads, then you are dealing with a Gucci style screw. 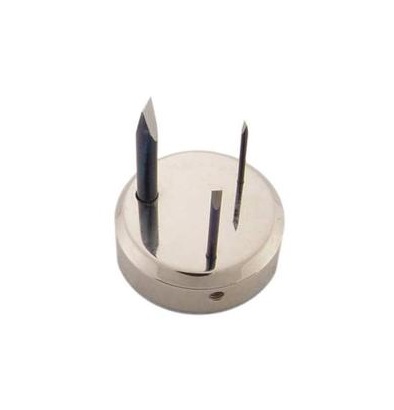 When your goal is to change a watch band held in place with Gucci screws, you must first remove the old band from the watch case. Before you can remove the screws from the watch band, you must first find which end actually screws out of the band. To do this, you will need to hold one side of the screw pin steady while unscrewing the other. You can use either your screwdriver block and flat head screwdriver or two flat head screwdrivers to hold it steady. We recommend using a screwdriver block because it is more stable and less likely to damage your watch pin or band.

NOTE: Since there is no way to tell which side of the screw will come loose, if after turning the screw several times it does not look like it has loosened at all, turn the watch case over so you can try unscrewing from the other end. Position the end you were unscrewing on the screwdriver block and turn it upright. With your free screwdriver, begin to turn the other end of the screw counterclockwise.

Then, insert the blade of your free screwdriver into the other screw head. Make sure that your first turn is a sharp and quick turn counter-clockwise so that you break the glue seal holding the screw in place. You may need someone to hold the screwdriver block steady so it doesn’t spin while you work. Once the seal has been broken, continue turning your screwdriver counter-clockwise.

When the screw comes loose, remove it and place it in your parts tray to keep it safe. You can remove the watch case from the screwdriver block at this point.

Hold the watch case in your hand and with your non-magnetic tweezers, push the remaining screw bar piece out of the watch band. When you can grab the screw bar with your fingers, pull it free and put it in your parts tray.

NOTE: As before, if the screw does not come loose after turning it several times, flip the watch case over and try removing it from the other end.

Once the screw comes loose, remove it with your non-magnetic tweezers and place it in your parts tray for safe keeping. After you remove the screw you can take the watch case off of the screwdriver block and set the block aside.

Use your non-magnetic tweezers to push the remaining screw bar out of the watch case and band. When the bar is partially out of the case, grab it with your fingers and pull it free. Place it in your parts tray for safe keeping.

Before you begin to place the new band on your watch case, you should consider replacing your Gucci style screws. The screws wear out just like spring bars do, and while you can use your old screws you run the risk of losing your watch band.

Take one of the screws in your tweezers and insert it into the open end of watch case lug. Turn it in clockwise once or twice with your screwdriver into the screw bar.

When you cannot turn the top screw anymore, remove the watch case from the screwdriver block and turn the case around so you can reattach the second half of the band into place.

Once the screw bar is in place, take your last screw with your tweezers and insert it into the open end of the watch lug. Turn it clockwise once or twice with your screwdriver to ensure that it stays in place.

Once both ends of the watch band have been securely attached to the watch case, you are ready to wear your watch again with its brand new look.