Sometimes your watch band clasp will wear out before your watch band does. If you don’t want to replace your whole watch band you can always replace the clasp itself. Use this guide to learn how to change a standard butterfly buckle that is held in place with single sleeve pins.

How do you know if your watch clasp is a standard butterfly buckle? There are a couple things to look for: if your clasp is completely hidden by the watch band and all you can see is a small seam between the two parts, you have a butterfly buckle that opens from the inside. When you look at a standard butterfly clasp, the clasp will have one solid tube that fits inside the split ends of the band. You will also be able to tell if your clasp is held in place with single sleeve pins if when you examine the ends of the pins they look just like a solid friction pin. 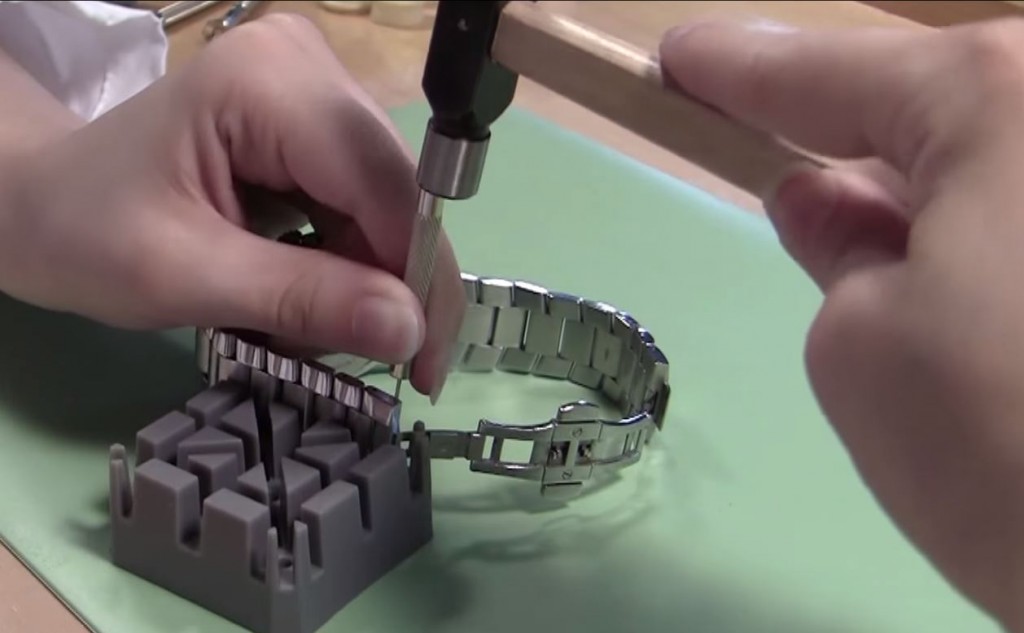 Now, take your pin pushers and test them in the hole until you find the one that fits in place. Insert the pin of the pin pusher into hole in the band. Using the flat head end of your small ball-peen hammer, tap on the pin pusher to push the watch pin out of the band so you can remove the clasp. You will have to use some force, but start with a small amount and work up so you don’t damage the watch.

Keep tapping on the pusher until you cannot push the pusher in anymore. Lift the band out of the watch holder and remove the pin with the jeweler’s pliers, placing it aside in your parts tray to keep it from rolling away. This may require some effort if the sleeve is still holding one end of the pin.

When you can’t push the pin pusher any further into the clasp, the sleeve should have fallen out on its own. Remove the clasp from the holder and pull the sleeve out if it is still attached to the clasp. Otherwise, pick up the holder and set the old sleeve aside in your parts tray and prepare to detach the other side of the band from the clasp.

With the measurements in hand, you can order a new watch band clasp. When you are ready to insert the new watch clasp into the watch band, you will need your two new watch pins and two new sleeves.

Start by placing the new watch band clasp in the holder and inserting one sleeve into the middle portion of one end of the clasp. Be sure the hole in the clasp is lined up with a solid portion of the holder. Position the sleeve in the hole in the clasp and gently tap it into place with your ball peen hammer to get it started. Be sure to use a pin pusher between the sleeve and hammer to make sure you do not damage the watch clasp when it is mostly into place.

Turn the watch clasp around and replace it in the holder to insert the second sleeve into other side of the clasp. Repeat what you did earlier in this step to place this sleeve.

Once both sleeves are in place, take your clasp and insert one tube end into the corresponding end of the watch band so that the clasp will close in the right direction for you when you are finished. Place the band and clasp in the band holder to keep the pieces held together steadily for you. Be sure that the hole is lined up with a solid portion of the holder so you don’t accidentally push it all out of place.

Then, insert the first pin in hole in the end of the watch band. You will have to hold the pin in place with one hand while you take your ball peen hammer and begin to tap it into place. When the pin reaches the clasp portion of the tube, you will need to use a little more force to fit the pin through the friction sleeve. Place the pin pusher between the end of the pin and the ball peen hammer to protect the watch band as you continue to tap it into place, gradually increasing the force until the pin slides into place, flush with the band.