How to Replace an Inside Open Butterfly Buckle – Double Sleeve Pins

Sometimes your watch band clasp will wear out before your watch band does. If you don’t want to replace your whole watch band you can always replace the clasp itself. Use this guide to learn how to change an inside open butterfly buckle that is held in place with double sleeve pins.

How do you know if your watch clasp is a inside butterfly buckle? There are a couple things to look for: if your clasp is completely hidden by the watch band and all you can see is a small seam between the two parts, you have a butterfly buckle that opens from the inside. Open the clasp and look at it from the inside, the clasp should fit into a three tooth tube in the band. You will be able to tell if your clasp is held in place with double sleeve pins if when you examine the ends of the pins they look like solid friction pin with a ring that surrounds the pin.

Next, you’ll remove the two sleeves from the edges of the loose end of the watch band. Place the loose end of the watch band in the holder. First you’ll remove the sleeve on the top edge of the band. Test your pin pushers until you find the one that fits in the hole in the band and rests on the edges of the sleeve. Use your ball peen hammer to tap on the pin pusher and push the sleeve out of the band. It may require some effort, but like before, start with a small amount of pressure and gradually increase it until the sleeve starts to move out of the band. Be careful not to accidentally push the sleeve into the middle portion of the band tube while you do this. 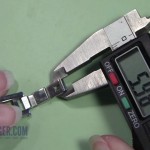 Next, take the old clasp so you can measure it to ensure your new clasp will fit in your watch band. The first measurement you need is inside the two teeth of the clasp. Grab your digital gauge and use the backward opening jaws to measure inside that gap to find the inner tube size. 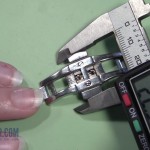 The second measurement you’ll need is the outside of those two teeth in the clasp. Use the large jaws of your digital gauge to find that measurement. And the final measurement is of the maximum width of the clasp itself. This measurement is taken by measuring the clasp from edge to edge at its widest point in the center.

Take your new clasp and insert one end of the clasp into the corresponding end of the watch band so that the clasp will close in the right direction for you when you are finished. The teeth of the clasp should fit between the teeth of the band perfectly like this. Holding the two pieces together, place the band and clasp in the band holder to keep the pieces together while you work. Be sure that the hole is lined up with a solid portion of the holder so you don’t accidentally push the pin out of place.

Then take one of your sleeves and line it up with the pin in the hole so that it will slide in to ring around the pin and keep it steady. Begin to tap the sleeve into the band with your ball peen hammer, until the sleeve can rest in the band on its own. Take your larger pin pusher and place it between the sleeve and the hammer to keep from damaging the watch band and gradually apply more force with the hammer until the sleeve slides into place.