How will you recognize a tri-fold clasp with buttons? When the clasp is open three metal plates and two joints, when it is closed the two lower plates will fold under the out clasp that matches the watch band style. The cover portion of the clasp will have two spring loaded metal protrusions that when pressed, release the clasp’s mechanism to open it.

The first thing to do will be to remove the old clasp so you can replace it and continue wearing your watch. Start by opening the watch band clasp and inserting it into your watch band holder so that the hole bottom layer of the clasp where it attaches to the watch band is aligned with a hole in the holder. 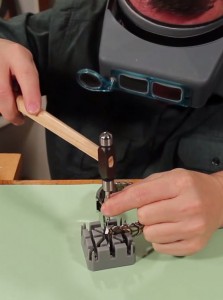 Then, use the old clasp to measure for the dimensions of the new clasp. Start by measuring the outside of the forked end of the clasp with your digital gauge. With that measurement in hand, you’ll measure the inside of the cover part of the clasp that fits over the watch band. Use the backward opening jaws of the gauge to find this measurement. It should be about one millimeter larger than you first measurement.

Order the right size and color replacement watch band clasp, once you have these numbers in hand. Be sure that your replacement has buttons too to ensure you have a secure clasping mechanism. 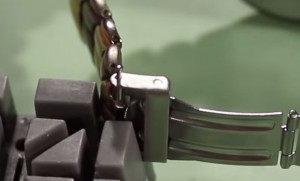 With the watch clasp partially attached to the watch band, you can now attach the other end of the clasp to the band. Take the two loose ends and hold them together so the forked end hugs the loose end of the band like this. Start to insert your friction pin into the clasp and band to hold them together and then place both parts into your watch band holder to keep them steady while you replace the friction pin.

Once the pin is flush with the watch band again, you can remove the watch band from the holder and continue wearing your watch again. To learn more about watch band repair, check out the rest of our Learning Center.