A Swiss movement will have stamp of 3 letters – E.T.A. and a followed by a number ex. 955-114, 2001-001 also will tell you how many jewels if there are any. You can always spot the jewel. It is the glassy red dot where the pivot of the wheel sometimes goes through. That number would be your reference number. If you need parts or a new movement, sometimes the identification is located by the battery, sometimes in one corner by the coil, sometimes it is in the circuit board. Some watchmakers would use their own nomination and should be crossed reference with standard ETA.

When you are ready to work in a watch, you should consider if the watch has a seconds hand, if the watch has a calendar window. If it has a calendar window, is it located a 3 o’clock 4 o’clock 6 o’clock. Also be aware of how thick the dial is, because sometimes the same movement has a long and short center shaft (canon pinion). The calendar wheel can be replaced, so if you do not find the same movement with the calendar at 6 o’clock, you’ll have to remove the old calendar wheel and replace it in the new movement. Sometimes the movements are discontinued due to the age, but you still can get parts, so you can clean the old ETA movement and order a coil, a circuit or both to make that special watch work again.

I mentioned ETA because is the largest of the Swiss companies there are also Rhonda FE, ISA. But the principle goes for all the movements, all of them are marked on the back either by movement company or the watch company. There is another way to identify a movement if for some reason no lettering can be read or found, under the dial is the bridge, the funny looking parts that hold the setting parts, looks like an alien hand if you had some imagination. Well the bridge is the watch fingertip, unique to each individual, so there are books with watch illustrations about this bridge, you can match it there. 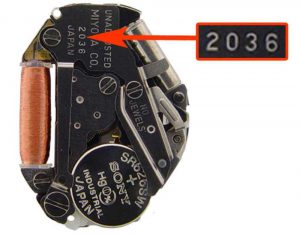 Japanese movements, Seiko and citizen are the largest watch companies in the world. They make all kinds of watches, some of them mostly for the Japanese market very costly. We normally don’t see them. Seiko use Hattori movements that are interchangeable and Citizen uses Miyota movements. Most Asian watches use them both. With Seiko and Citizen the identification is on the back of the watch, sometimes in the bottom of the dial, and most definitely in the movement, like VX42, V810 and so on. Same goes for citizen 5R12, 6L12 and others. My advice: do not try to fix these movements, it would take considerable skill and time. It is much easier to replace either for original brand or the generic. I can provide you with the numbers above mentioned, a perfect match can be found.